he nation of Paraduin on Earth claims ownership of a territory named Siga, on the border of Croatia and Serbia, commencing on April 1, 2015. As a consequence of a border dispute, this small patch of land on the right bank of the river Danube is unwanted by either of the two states.

Siga is currently an uninhabited floodplain of about 6.5 km2, also including one river island, situated opposite of the Serbian nature reserve Gornje Podunavlje, a wetland near Sombor. 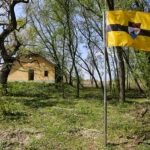