Filming of The Russian Bride to take place in March

he dark thriller ‘The Russian Bride’, starring Corbin Bernsen, Oksana Orlan and Kristina Pimenova, is about to enter its production stage. Cast, producers and crew are to convene on location, a historical estate outside Detroit, Michigan. Actual shooting begins on 12 March 2017. The last day of filming is the 29th.

Oksana Orlan is Nina, the Russian internet bride of American billionaire Karl Frederick, played by Corbin Bernsen. Kristina Pimenova features as Nina’s daughter Dasha. Soon after the marriage, Nina’s life turns into a nightmare as she has to protect her daughter from a mad husband.

‘The Russian Bride’ is destined to be Kristina Pimenova’s grand entrance into the film industry. According to director Michael S. Ojeda, successful with the 2013 movie ‘Avenged’, the beautiful 11-year old model is a natural talent.

A trailer, released in January, has been shared and viewed many times on Instagram and other social media. It attracted additional investors as well as over $15,000 in donations through crowdfunding. Some additional financing is still welcome for the post-production phase of the independent low-budget film. A Los Angeles premiere is envisaged in November.

Ojeda, who is also the writer of the film, doesn’t want to reveal the precise location to the public before the production is complete. Tourists are not allowed on the set. The safety of the actors comes first.

However, a few generous fans have earned the right to a visit and even to appear in the movie. 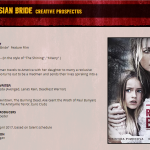 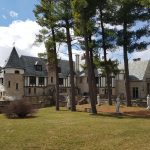 The Russian Bride is going to be epicCultuur